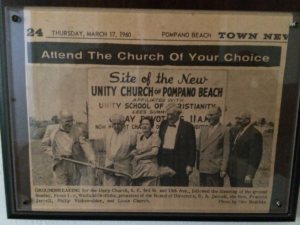 In 1957 Rev. Frances Jarrell started a Unity Study Group at the Pompano Beach Chamber of Commerce on East Atlantic Avenue. She had previously been the founding minister of Unity of Delray, but resigned her post there to start a ministry closer to her Fort Lauderdale home. A church office was established at 5 NE 27th Avenue, in Pompano Beach.

In January, 1959 Articles of Incorporation/By-Laws including thirty-eight founding members were recorded, and a Charter granted by Unity School of Christianity in Lees Summit, MO. In April of 1959, newly incorporated Unity Church of Pompano Beach purchased the present land at 261 SE 13th Avenue for $7,000.00 via owner financing, to be paid off in three equal installments. Unity Church of Pompano Beach was well on its way!

Fund raising events such as “card parties” and private loans (“Unity Bonds”) financed the church buildings. Ground was broken on March 13, 1960 for what is now known as “Fellowship Hall” and the first worship service was held there on Easter Sunday, April 17, 1960.

In December, 1966, ground was broken for the second building, the sanctuary. The first service in the sanctuary was Easter Sunday, March 26, 1967. 1967 marks the official dedication of the entire church complex, completely debt free. The original cornerstone containing the board members of 1967 along with a Masons’ dedication can be viewed on the outside northeast corner of the sanctuary. Founding minister, Rev. Jarrell, retired from ministry in 1972 and made her transition on Easter March 30, 1975. Many years of community, worship and study have been enjoyed at Unity of Pompano.

Its facilities have also provided meeting places for many in the larger community. In late 2010 a group of twelve Unity Truth Students formed to help continue the blessing of Unity of Pompano. The church had been abandoned and was in danger of being auctioned for past debts. An emergency board was created, and with many dedicated volunteers led by the tireless dedication of Beverly Spivey, Licensed Unity Teacher, Unity of Pompano has continued to what it is today: a thriving, loving spiritual community welcoming all!